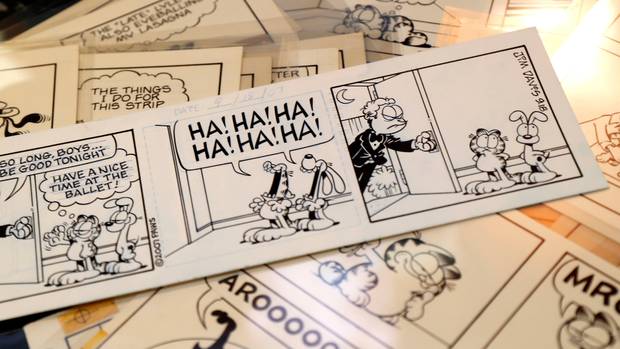 Cartoonist Jim Davis is offering up more than 11,000 hand-drawn Garfield comic strips featuring the always-hungry orange cat with a sardonic sense of humour.

“There are just so many, and it was such a daunting task to figure what to do with them,” said Davis, creator of the comic strip that appears in newspapers around the world and has spawned TV shows, movies and books.

Dallas-based Heritage Auctions began offering up the strips in August. The auction house is selling two daily strips each week, with longer Sunday strips being offered throughout the year.

The strips span from the launch of Garfield in 1978 to 2011, when Davis began drawing the strip digitally.

Comic art collector Nagib Baltagi has purchased about 20 of the strips and plans to bid on more. The 36-year-old said the Garfield auction particularly resonated because as a kid he loved watching the cartoons and reading the books.

Baltagi, who lives in Miami, said he’s drawn to the strips that feature several of the characters and have a storyline that strikes a chord.

Indiana-based Davis says over the years he gave some strips to family, friends and staff, while others are on displays at museums, including the Smithsonian Institution, and he even tried selling them on his website for a few years. But he kept most of them in a fireproof, climate-controlled vault.