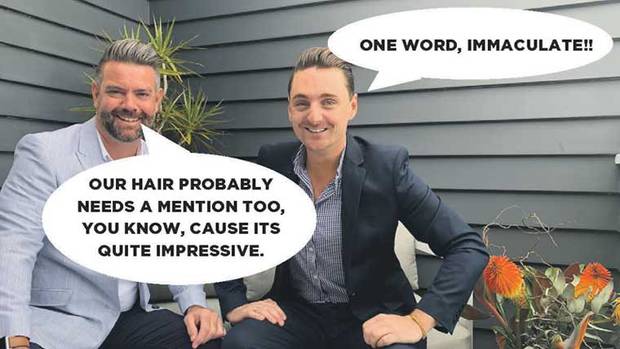 From ‘hipster allergy’ charges to real estate agents jumping off cliffs – thinking outside the box when marketing a small business can be make or break.

As top ad-execs know there is a fine line between an ad or campaign grabbing attention, falling flat or in some cases causing offense.

If you are the creative type a job in advertising could be the perfect fit with the right approach launching a career and creating a last impression.

And it’s not just advertising jobs that succeed with creativity. Hospitality and property roles that rely on self-promotion to stand out benefit too.

This month a stroke of comic-creativity had two Waiheke real estate agents flat out with new listings.

Brad and Tobias Roebuck-Ward of Bayleys took out a full page advertisment with themselves as comic-book style stars to kick off the spring season.

And it got them plenty of feedback.

“There are 48 agents on the island so we wanted to do something to show our point of difference,” Brad Roebuck-Ward said.

“We were looking through other advertisments and just wanted something that stood out and made people smile.”

The comic includes attempts to order coffee in terribly mispronounced French, pokes harmless fun at other agent’s advertisments and talks about their own “immaculate hair.”

The response to the advertisement had been huge for the couple with “visits to the website up ten-fold” and people recognising them in the street.

“It has been amazing, people have shouted out that they love the ad and we are flat out with listings and auctions.”

Neither have a background in advertising or marketing but are both creative.

They opened the popular Ponsonby Road eatery Adam Arnold in 2017 before moving to Waiheke to concentrate on real estate.

The couple aren’t the first to take risks to grab attention for their business.

Just this week popular Indian restaurant Satya Chai Lounge made the news for the introduction of a $5 surcharge for “hipster allergies” to its menu.

The charge was to modify the meals to fit with gluten-free or vegan diets.

Most saw humour in the post but the joke fell flat with some customers who said it poked fun at people with dietary restrictions.

Earlier this year real estate agent Jock Kooger showed how far he would go to sell a house by jumping into the ocean at the owner’s request – fully clothed in his signature blue suit and tie.

The Bayleys agent told the owners of a stunning cliff-top home in North Auckland he would do anything to sell their newly renovated house. The owner asked “Even jump off a cliff?”

So he did.The resulting video shows Kooger jumping off the rocks near the house into the water – dressed in a suit, tie, shirt and shoes.

Kooger had no regrets with the stunt and said it showed how serious he was about selling the house and the type of fun someone could have living next to the beach.