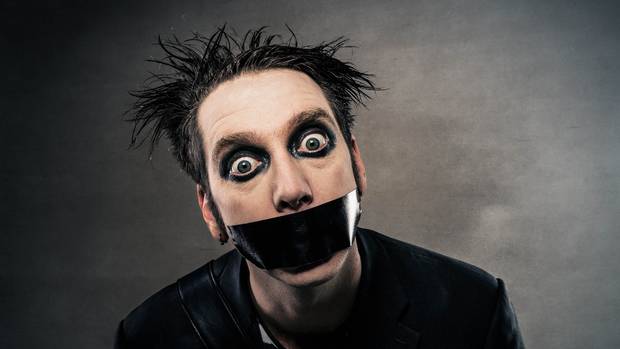 The Las Vegas-based mime artist will make Comedy Gala appearances in Auckland on April 30 and Wellington on May 3, and perform his new solo show at the Comedy Festival from April 30 – May 24.

“I am beyond excited to be coming home to do some shows,” Tape Face, aka Sam Wills, tells TimeOut from his home in Sin City, Nevada.

“I was last there two years ago for the busking festival down in Christchurch but I haven’t performed at the New Zealand Comedy Festival for several years.”

The 2005 Billy T award winner is eager to road-test his new gags and says Kiwi audiences will provide a good gauge as to whether his fresh material will hit the mark elsewhere.

“The new show has evolved, it’s a bit darker in places, it’s a bit more long-form comedy,” he explains.

“I’m definitely still sticking to the same format so it’s very audience interactive but I’m not about humiliating people or making fools of anyone.

“I rely on the audience for the show so I make sure that everyone who is on stage is treated like a star, so when they leave they get a huge round of applause.

“New Zealand audiences are a very good judge of comedy so if I can make them laugh it tends to work well elsewhere in the world. I can’t wait.”Wills’ career has boomed around the world since he starred as a finalist in the 2016 season of America’s Got Talent.

That exposure helped him win a six-nights-a-week residency at Harrah’s Casino where for the past two years he has occupied the House of Tape.

“Going on America’s Got Talent was one of the definite tipping points in my career.

“It’s very hard to crack the American circuit and comedy scene. So to go on the show and be seen by millions of people and have them like the show, it made it very easy for me to jump into the comedy scene over here.”

The success of the live act provided Wills with the opportunity to expand his brand by enlisting and teaching other comics to perform as Tape Face.

That move initially caught some fans by surprise and a short-lived controversy last year saw him accused of duping his audience by using stand-in performers.

“There was a bit of flak but that’s always going to happen with any sort of transition period,” he says.

“We’ve just branched out and we’ve just upgraded to our third Tape Face, who has just come back from doing shows in Australia.

“We are all about show consistency so the shows are 100 per cent the same.

“I will definitely be the one coming back to New Zealand because it is such a brand new show, I’m still developing it.”

The 41-year-old has a tour of India lined up for later this year, but admits he never imagined his unique brand of comedy would result in a successful international career.

“God no! It was never meant to be this serious. I used to do shows as myself as Sam Wills, back in New Zealand.

“I developed Tape Face as a bit of a joke really, to prove a point that I could shut up for five minutes.

“I never dreamed it would take off and be this crazy show but that’s half the fun of it really.”

What: Tape Face returns to the New Zealand International Comedy Festival
When: April 30 – May 24
Where: Auckland and Wellington

Australian Becky Lucas performed in the smallish Basement Theatre Studio last year but has been a viral hit in her homeland for some time and should be under a bigger spotlight this time around. Lucas won plenty of notoriety when she was banned from Twitter for jokingly threatening to kill Prime Minister Scott Morrison.

is another Aussie, who was a surprise winner of the Melbourne Comedy Festival’s Barry Award a few years ago and is coming here for the first time. After taking out the Barry, the unassuming Campbell went on to do an acclaimed midnight run at the Edinburgh Festival last year. Expect plenty of improv and high concept humour together with multimedia and props.

Glasgow’s Larry Dean will bring his Scottish sense of humour Downunder after wowing crowds during his first visit here in 2018. The Amused Moose Comedy Award winner and Edinburgh Comedy Award nominee’s unique routines delve into gay and Scottish themes, which are delivered through his lovable onstage demeanour.

Fellow Scot Ray Bradshaw’s groundbreaking Deaf Comedy Fam is the first comedy show performed in sign language and English simultaneously. It’s a challenging proposition because the two languages order words differently so laughter can come at different times. But sell-outs in Edinburgh and Australia suggest Bradshaw, who grew up with deaf parents, can cope.

Finally, the Aboriginal Comedy Allstars will bring their exceptional indigenous comedy to our shores for the first time. The brightest Aboriginal comedian stars in Australia — Kevin Kropinyeri, Sean Choolburra, Andy Saunders, and Steph Tisdell — make up the four-piece act that delivers fun, cheeky, thought-provoking jokes that are sure to earn big belly laughs.