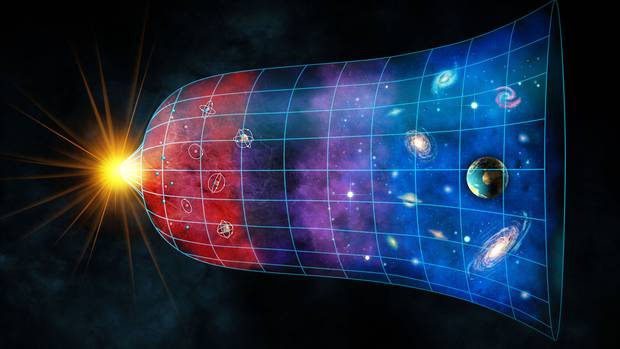 It was called the “primordial dark age” – a mysterious period that lasted just a trillionth of a second, but saw the universe balloon by 100 trillion times.

Now University of Auckland researchers have taken a leap forward in understanding this epoch, which took place immediately after the Big Bang in which our universe was born, 13.8 billion years ago.

At this point in the cosmos, there was no light, nor were they any of the subatomic particles that we know today.

As the primordial dark age began, the Universe was filled with a mirror-smooth, cold, ultra-dense, exotic state of matter called quantum condensate.

This condensate could survive for much of this time, but eventually had to fragment into particles and radiation due to the force of gravity.

In a paper published in Physical Review Letters, University of Auckland researchers PhD student Nathan Musoke, Research Fellow Shaun Hotchkiss and Professor Richard Easther have shown that interactions between this condensate and its own gravitational field were captured by the so-called Schrodinger-Poisson equation.

This equation described the gravitational interactions of quantum matter.

Using this insight, the researchers performed the first numerical simulations of the gravitational collapse of the condensate, showing that the peak density would quickly grow to be hundreds of times larger than the average density once gravitationally-driven collapse begins.

It marked a key step forward in our understanding of the very early universe.

The work could ultimately allow cosmologists to better predict the properties of the “ripples” in the early universe that eventually grow into galaxies and improve our ability to test theories of the Big Bang.

In particular, it offered fresh insight into the hypothetical inflationary phase which would precede the primordial dark age and generate the quantum condensate – a key part of most theories of the evolving universe for close to 40 years.The research could also tell scientists more about the production of enigmatic dark matter – and the origin of the mismatch between matter and anti-matter in the early universe, which ensured that our present-day cosmos was built from regular matter alone.”This is an exciting result, and provides a pathway to understanding the predictions according to our theories about the first moments after the Big Bang, and to testing new ideas in ultra-high energy particle physics,” Easther said.